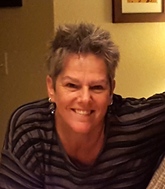 My work is born of my love of Spirituality, and my deep connection with Mother Earth and Her creatures. This, and a commitment to serve, is the heart of my life's work as both psychotherapist, and shamanic practitioner/teacher.  While not driven by nor oriented in any specific religion, my trust and faith in Spirit is rooted in common tenets shared by many different cultures and religions.
I received a Masters of Social Work degree with a concentration in Treatment from Denver University in 1987.  Out of grad school, I became the Executive Director of the (then named)
Gay and Lesbian Community Center of Colorado for nearly two years.
Soon after beginning a private practice in late 1988, I sought training in more holistic approaches to counseling, studying somatic psychology, pre/perinatal psychology, and numerous spiritual traditions, including shamanism. Body-centered psychotherapy is my primary approach in counseling sessions.  (see more on approach page).
My first training in Shamanism was with Angeles Arrien in 1993.  I had no idea then it would weave into a long path of becoming a shamanic practitioner and shamanic teacher.
I've received certifications in Addictions Counseling, Integrative Body Psychotherapy, Reiki, EMDR, Trauma Touch Therapy, Body-Mind Vibrance Coach and Conscious Relationship Coach. Through professional and educational pursuits, I remained compelled by traditions that aligned with my core spiritual and animistic values, especially the rich world of Shamanism.  I completed the three-year advanced training and initiations through the Foundation of Shamanic Studies in 2013, and have since completed the two-year Shamanic Teacher Training with Sandra Ingerman.
I'm grateful to be listed as Shamanic teacher and practitioner on Sandra Ingerman’s Shamanicteachers.com and as shamanic practitioner on The Foundation for Shamanic Studies site, shamanism.org.

Statement of Intent -
There are certain spiritual, sacred ways that I live by and that live in my heart. These ways and my faith were born of my own heritage, blended with a number of other traditions which share common basic tenets, values and spiritual beliefs. I deeply respect and appreciate these ways. Based on years of training, initiation and a profound calling, I am a Shamanic Practitioner, and Teacher of cross-cultural shamanism.  I have no interest in “playing Indian," nor do I seek to profit from Native American traditions in any way for myself.  ​I intend to continue to learn, grow and refine my knowledge and craft for the betterment of others, my community, and the Earth.
I'm committed to counsel, lead, teach in an ethical and respectful manner.  Shamanic methods are only administered with clients' explicit permission and knowledge. A devotion I feel with ease is being of service to my clients, students, and the Native American women and men in prison and in my community.
It's been taught in different healing modalities that an offering in sacred reciprocity is appropriate when one receives a healing from their teacher or elder, or attends circle or ceremony. I don't charge people to gather in prayer. For quarterly/seasonal celebrations, I do request an offering. Any monetary funds received are not kept for my own benefit, but contributes to the support I provide to the incarcerated Native American women and men in the Denver Women's prison and Colorado Correctional Center, such as supplies for handouts, donations in the form of sacred herbs, Native foods on feast days, "treats" and/or supplies for their quarterly celebrations, etc. I have accepted the responsibility to be an advocate and volunteer there.

Service -
I've been a volunteer at the Denver Women’s Correctional Facility (DWCF), since 2010 in different programs. In the Fall of 2016, the volunteer coordinator of the prison at the time was aware of my background and work. He asked me if I'd volunteer for the faith group called "American Indian Talking Circle."   He brought me to one of their circles to introduce me to the Talking Circle, comprised of offenders from various Native American tribes. The women were given the choice and opportunity to vet me for the role - almost unheard of in a max level prison.  I attended for a few weeks, and they welcomed me to participate, advocate, and lead their sacred circle.
In 2019, I was asked to volunteer for the Native American men at Colorado Correctional Center several times and will continue to do so. I am honored and humbly grateful to serve the Native Americans at DW, CCC and DRDC in this capacity.
DWCF also launched two new programs in 2019 - a Mentorship Program where inmates could be assigned to an approved volunteer for extra support, guidance, etc. within six months before and post their release.
And what's called the Pro-Social Relationship program.  On approval from the warden, certain offenders may be in touch with volunteers who are certified by DOC to provide spiritual and emotional support, mentoring, rides, tutoring, etc. for those released from prison.  Again, an honor to be serving in these ways.

Life Lessons -
My first, profound life passage was my mother's sudden death when I was 15 years old. This was a deep soul wound.
She was the first person who really saw me. She told me that I had a gift and could see and sense things beyond the ordinary. It took me many years to understand that she was directing me to listen to my deeper calling and to follow  my heart.
During my path in higher education, achieving degrees and credentials, I was also in a dark night of the soul.  It was during my masters program when I hit bottom. The trauma and grief of losing of my Beloved mother, along with many other losses, sent me reeling into severe addiction and alcoholism, and trouble. Naturally, hitting bottom was also when I woke up (clean and sober since 1986). It was in very early stages of recovery that I found my ground and a familiar sense of Spirit. I found authors and teachers such as Angelis Arrien, Sandra Ingerman, Michael Harner, and many others.  I rediscovered my love of ceremony and prayer, which originated in my being first generation Sicilian, and my Roman Catholic upbringing. Studies began in more Earth based, and more holistically, spiritually oriented teachings. Recovery and my spiritual path were really one and the same journey which cracked my heart open and repaired my soul.  It seems these initiations - the deeper wounds of loss and addiction, were necessary for me to find a good way of life, a devoted way of being with Spirit and my work as a therapist and Shamanic practitioner.

The Sacred Pipe -
All cultures engage in ritual involving the elements - fire, earth, air, water.  A pipe is a sacred, living tool used in different traditions to lift our prayers to Creator.
I was passed the pipe in 1995 by a teacher, giving me a profound honor and responsibility.
This pipe was made for my teacher by her Lakota elder with whom she apprenticed for two years. He passed her this pipe with the Lakota teachings and ways of  sacred ceremony. After many years of leading ceremony, my teacher received a message in a dream that she was to either pass the pipe to me, or bury it. After careful deliberation, I accepted the responsibility and was given instruction about the pipe and the appropriate ways of conducting ceremony. The Lakota Sioux call their sacred pipe Chanupa. It is called by other names in other cultures.
At that time, I had no idea what was ahead for me as a shamanic practitioner and ceremony leader. Through the years, I have learned beyond words what it means to be a pipe carrier. I understand that I am the the keeper of the pipe for the community, not owner. I have had the honor of sitting in the lodge and in ceremony with Ojibwe and Mayan Shamans, Lipan-Apache Maestra of Curandarismo, and Lakota teachers, and Dine (Navajo) teachers, receiving their instruction and blessing. I've also been committed to my own study through ordinary and non-ordinary states of consciousness. Being a pipe carrier is not something I sought out or decided to pick up. Rather, I was asked, and it is a responsibility which I hold with humble gratitude and fierce respect. 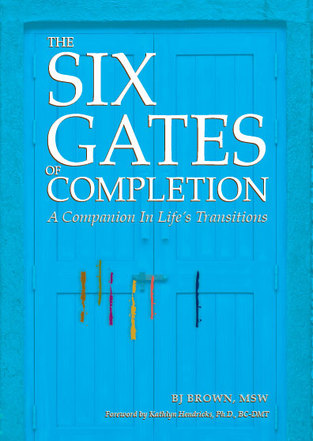 The Six Gates of Completion ~
A Companion in Life's Transition
Endorsed by Best Selling Authors -
​     Kathlyn Hendricks and the late Don Campbell
"The Six Gates of Completion is about facing the abyss, going straight on through, and finding sweet life reawakened on the other side....  BJ Brown radiates a new paradigm of transparency and unity.  It si time now to celebrate wholeness, to model and practice the art of alignment.  You can find your own entirety as you journey through the gates she has opened.  With BJ, in person and through this book, you benefit from her living integrity."
Kathlyn Hendricks, PhD., BC-DMT
Director of Training, The Hendricks Institute,
Co-Author of Conscious Loving


" BJ Brown has created a rich, clear cycle of inner enrichment through The Six Gates of Completion.  Whether you are starting your life journey or taking time for private reflection, you will find harmony, insight, and deep caring within, these pages."
Don Campbell
Author of The Mozart Effect, Healing at the Speed of Sound and Sound Spirit